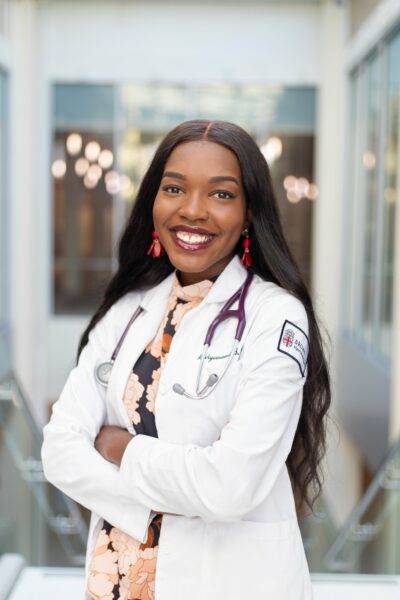 Adeiyewunmi (Ade) Osinubi is a documentary filmmaker, photographer, and medical student at the Warren Alpert Medical School of Brown University. She received her Bachelor of Arts in Public Health from Brown University in 2018. As an undergraduate, she received the Alfred H. Joslin award for exemplary contributions to student life at Brown and was recently inducted into the Delta Omega Honorary Society in Public Health for her contributions to the field of public health.

While at Alpert Medical School, Ade has held various leadership positions, notably, President of Alpert’s Chapter of the Student National Medical Association (SNMA) where she led the organization to win the National SNMA Chapter of the year. She currently serves on the SNMA National Board of Directors as External Affairs Committee Co-Chairperson.

Ade is very passionate about women’s health issues and has used her skills in videography to address women’s health disparities. While in medical school, she independently filmed and produced a documentary series entitled Black Motherhood through the Lens which features four Black women’s experiences in navigating the reproductive healthcare system. Due to her work, she has been invited to speak at national conferences and forums and has won awards at film festivals. In addition to photography and film, Ade is a writer and her work has been published in Glamour Magazine, Blavity, and various medical journals. In the future, Ade hopes to pursue a career in medical journalism, using her passion for photography and film to elevate the voices of communities of color.

A note from Ade:

I am sincerely honored to be selected as a recipient of the AMA Alliance Grassroots Physicians of Tomorrow Scholarship. Your generosity has made a significant and positive impact on alleviating the financial burden of my last year of medical school. As I complete my final year at the Warren Alpert Medical School of Brown University, I am so thankful to receive this generous scholarship. This scholarship award brings me closer to achieving my goal of being an Emergency Room Physician who fiercely advocates for the underserved.”

Use the form below to make a tax-deductible donation supporting the AMA Alliance Grassroots Physicians of Tomorrow Scholarship.